What I made this week

One of my goals for the year was to make more gifts. Not because I necessarily think it saves money. My reasons were this. I see A LOT of projects that I want to make or try and I wanted our gifts to be more meaningful and thought out. We all get so much stuff, and I just didn't want to keep handing out more stuff, crossed off a list or rushed out and bought on the way to a party. It means I have to think ahead more. Look at what's coming up and plan. Which is a good thing because I also really want to shop more on Etsy and you have to think ahead to do that so you can accommodate shipping times!
February is a very busy month for us. We have 7 birthdays, a baby shower, and Valentines. Not to mention any preschool birthdays (which if you follow me on Twitter you already know I have failed at once! I will now RSVP the day I get the invite!). Not to mention that none of my December/Christmas projects got done on account of illness. So I have piles of started projects and fabric all over my little craft area! So I made a "Make it List" for what I was going to get done over the next 4 weeks, here it is:
So this is what I finished this week, which totally impresses me, i can't believe how productive I've been....I must have ignored something else!

1. Barrette Holder; I saw these at a craft fair last summer and thought, I can make that. Ugh, I could, but I don't like the way this one came out. 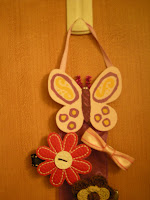 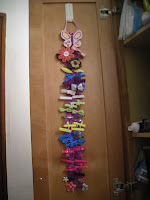 I choose the smaller butterfly because it's hanging in a cabinet, but I think a bigger one will look better and am going to find one and re-do this. I also don't like the paint job, I think it would look better reversed with the base being purple. Finally I had no idea we had so many barrettes, organizing them makes it so much nicer! So next time I am going to do two ribbons. My daughter of course cares not. She is in LOVE with it. She is finally letting me do her hair again and the first few days had to have the door to the cabinet open whenever she was in the bathroom.

2. I did get these hung, but I don't have a picture and my computer is being SO SLOW today, so I will add this to next weeks post.

3. Done, and I am so thrilled. I have a love hate relationship with tulle. I'm a girl, I love the look of it and my daughter loves tutus. However the tulle lining of her Halloween costume was so hard to get right I was skeptical about sewing the tutu but it came out great! My daughter picked all the colors (I would have done pink). I'm not in love with the added beads, but my daughter liked it. Here is the finished combo: 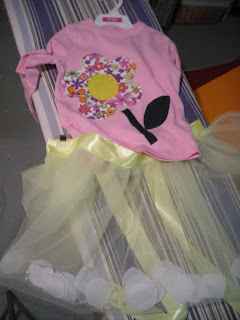 I found some lady bug buttons that I added to the leaf after I took this picture, but none of the pictures came out.

5. It took about 4 hours and my hand hurt after the first hour straight of cutting the felt. but Johnny Depp helped pass the time. I am so happy with how this came out. I was certain mine would not look good and I would be disappointed: 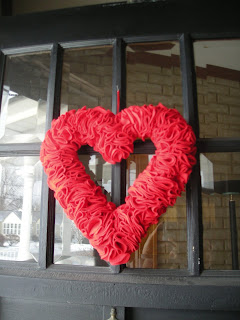 I know have two sicks kids and need to spend the weekend disinfecting the house (again! This has been the worse winter). So we will see how productive next week is!


* all images property of PeanutbutterinmyHair not to be copied or distributed without permission.

I LOVE that heart wreath! I want to learn how to make that!!