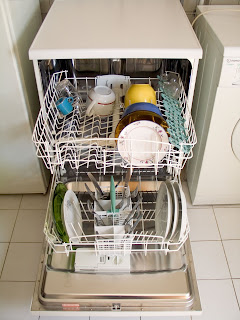 I have a love hate relationship with my dishwasher.
Don't get me wrong. I love that we finally have one. it was a requirement when we were house hunting, no dishwasher, no showing. I was that serious about it. Almost 2 years with 2 kids and no dishwasher was more than enough for me! Maybe it's just my kids, but they go through what feels like a million dishes a day. The worst is those sippy cup parts that are small and always end up filled with food, cheese (i.e. milk that has been under the couch for a week), or mold (sippy cup left in car, under bed, etc. for a week).
However, now that I have a dishwasher. There are many times I find myself hating it. Maybe it's a little bit of jealousy creeping in since the thing does clean dishes better than me, and my hubby was kind enough to point it out. I;m sure that's not it, lots of things are better at housekeeping me including pigs and I don't loose sleep over it. I think my hate boils down to 3 things:
Really, is that asking for too much? Apparently it is. Therefore it become just like doing laundry you spend all the time cleaning it and are left with even more work in the baskets of clean clothes that need to be folded and put away. Now my kids do empty it on occasion, but then I have to listen to them fight over who gets to put away the knives (the butter ones I don't let them fight with sharp knives) and it's just not worth it.
When I load the dishwasher (that's a big when, remember Kitchen Chicken) it's a neat orderly affair much like the picture above. All the cups start on the right hand side and are lined up in rows. The left hand side is for bowls. On the bottom, plates on the right, big stuff on the left, kids plates in front, adult plates in back. It makes sense. It allows the maximum amount of dishes to be placed in an orderly fashion. When my husband and son load it it's a mess with dishes every which way and I end up re-doing it to put my dishes in. Twice the work.
This is by far the biggest reason I hate my dishwasher. After being her about a year we noticed that the soap wasn't coming out and the dishes were still dirty or dirtier after running the machine. I was fuming because the whole point of the machine was to clean the dishes and make my life easier, not harder. I am not a fan of doing things twice! So we called our warranty company, 5 minutes and $100 dollars later the repairman pulls out a filter packed with crumbs, food, grossness and tells me that's the problem. Really? Isn't there supposed to be something that breaks that up?
He proceeds to roll his eyes at me in that "you poor foolish women you don't understand mechanics" and I proceed to clinch my fist and not kill. He lectured me about how we need to rinse or dishes. Really I said, the manual says NOT to rinse our dishes. "Oh no no no (you poor foolish women)". Then he goes on to tell me how it's not installed right and he can't fix that. Thanks great. Well 30days later, NOT WORKING AGAIN! Hubs got them to come out for free since it had only been 30 days but because our life is so awesome our heater was broken at the same time. Hubby had to choose which repairman to be home for and went with heat guy.
So once again I am stuck at home with the same blasted repairman and he tells me, this is user error. Starts lecturing me on rinsing dishes. I almost castrate him. At this point I am practically WASHING the dishes BEFORE I put them in a machine that is supposed to wash them. I was irritate and if I didn't have to pick my kid up from preschool would have been trying to figure out where to stash his body.
So guess what happens? Yep 30 days later the damn thing is not working again.
So this time Hubby decides to take it apart. Guess what? The repairman, that I paid $100 to put it back together wrong (I should mention that he gave me a lecture about how if my husband tries, to makes sure he does this right) so none of the gunk was going down the drain where it was supposed to go. My hubby and Google worked on that thing all night and now?
I am in LOVE again.
Both with my hubby and my dishwasher because my dishes are clean, even if they are in an organized heap!
{photo credit Wiki Media Commons}
Posted by Melissa Haak at 6:00 AM

Stopping by from Sits :) Have a great Tuesday!!!

i wish i had a dishwasher. my last apartment had one, and even when i just used it as a drying rack, it was still better than not having one. problem is, we don't have enough space in the kitchen for a dishwasher. *le sigh* curse you small kitchens!

Yeah- I HATE doing dishes too. My husband ends up doing them 90% of the time. Great blog!

I am right there with ya - I need to try and find a self unloading and self loading dishwasher - that shouldn't be too hard - right?

We went many years without one, too. Now, I love mine. Though if it would put the dishes away for me, that would be perfect.

Love it!! The whole rinsing thing irritates me too..Yay for hubby!

lol!! This about sums up my feelings on the dishwasher, too. Also, defintiely should be linked in your Sunday Funnies.