Close Encounters of the Animal Kind 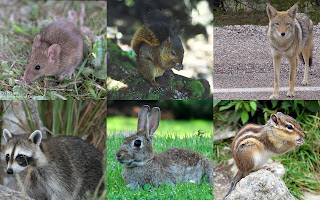 {Photos from Wiki Commons collage by Picassa}
When we moved to the middle of nowhere suburbia I knew we would be dealing with more pests than we did in the city. I expected raccoons, squirrels, chipmunks, other small furry things. I was not prepared for the coyotes or the feral cats. We were discussing the coyotes and their encroachment into our neighborhood at playgroup today while we watched a squirrel try and succeed in knocking down a bird feeder.
Which brought me back in time to an animal encounter we had in the CITY that was weirder and closer than any I have had in suburbia. Now before I tell you the story I must preface this with I am an outdoor girl I don't mind dirt or animals. We camp and hike and I am not scared of many things. I HATE cockroaches with a passion and I prefer mice to not be in my house (or dorm room- that's a story for another day!). I am not however one of those squeamish, screaming, girls afraid of animals.
When we lived in the city we lived in a 3 story apartment and our kitchen looked over the gangway to the roof of the building next door. The squirrels in our neighborhood were notorious for being, smart, tricky, and willing to new through anything to get food. They apparently are also very smart and never forget where they find food.
Well I woke up one morning to my cat going crazy, and hearing some strange clicking noise. I assumed he was harassing the squirrels in the tree out front. I walked into the kitchen to get some coffee and feed the cat, assuming that was why he was being so obnoxious. Only when I got in the kitchen I discovered he was being obnoxious because there was a SQUIRREL IN OUR KITCHEN!
Did you catch the part where I said I lived on the third floor of an apartment? 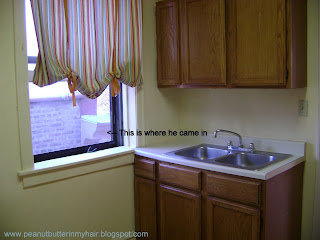 Yep, that's where he was. Sitting on top of those cabinets above the sink, looking down on my head. I screamed, while squirrels aren't scary they are not supposed to be in your kitchen, before 7am! Also? He was blocking the way to the coffee maker so I was being as rational as I could without caffeine.
So the first thing I did was call my husband. He laughed. I yelled at him, told him to come home. He said no.
So I called the police. What else was I to do? I had a 2.5 yr old and a baby, she was only a few months old at the time. I had to assume the squirrel was rabid because why else would it be in my kitchen? However I didn't want to call 911 because, you know it wasn't a real emergency. Well when I called the station she told me I needed to call 911 because they couldn't dispatch from there anyways. So I called, sure I was going to hear my stupid 911 call on the 6pm news.
What seemed like an eternity later the police are finally there. I now have 2 kids up, hungry, confused, and wanting to know why I won't let them leave there room, where I have locked them and the cat. The police walk in and say there is nothing they can do until animal control comes on at 8? WTH? 8am? Aren't most urban pests nocturnal? Wouldn't it make more sense for animal control to be on overnight?
Anyway, Tweedle dee and Twedlee dum (I do greatly respect our police force and know they are brave individuals, these two were not their finest) walk into my kitchen, see the squirrel above their head, sequel, reach for their gun, and jump out of the kitchen. I am not kidding, they were more scared than me. Lucky for me (and my security deposit!) he didn't pull the gun out and instead grabbed the billy club. Standing at the kitchen doorway poking it in the general direction of the squirrel and than jumping back 10 feet when it clicked at him. I suggested opening the back door so we (meaning THEM, the brave men in blue who were supposed to be protecting ME) could shooo him out. The police asked if I could get my cat in there to get him out, or if we could somehow contain the cat in the kitchen. To which my husband (on the phone, he wouldn't come home) replies "did the police just deputize my cat?".
Did I mention that this is all happening at 7am? That I am in my Pajamas? Oh and that my kitchen is TRASHED. There are dishes every where, garbage needs to go out, the floor is messy...we had a baby that was still nursing every 2-3 hour at night! Embarrassed does not even begin to describe what I felt.
So 8am rolls around and the clearly disturbed that she has to work animal control person marches into my house with an extra large net on a stick. She walks into our kitchen and just starts wilding swinging this thing at the squirrel. Seriously? If I wanted squirrel shit all over my kitchen (because they do that when they are scared) I could have swung a broom at him and accomplished the same thing! I thought you were a professional! She finally manages to shoo him out the door and than she turns and says to me:
"That was your free one, next time you have to do it yourself or pay for it"
WTH? My free one? Isn't that your job? This was not a squirrel date gone bad! This was an intruder in my home! I went from embarrassed to pissed off.
Apparently what happened (you can see the pic above) is that for some reason this not so smart (probably rabid) squirrel decided to jump off our neighbors roof to our windowsill...maybe it was the prospect of food. Maybe my cat invited him, I don't know. Once there he was stuck. He didn't have enough room to jump back and there was no gutter or anything for him to grab on to. Seeing the small hole my cat had already started int he screen (from trying to get out and chase squirrels!) he chewed through our screen and ended up in my kitchen.
Apparently he didn't like my cooking either though because he never came back.
I spent the rest of that day cleaning the kitchen from top to bottom with bleach because I was sure we were all going to die from some kind of squirrel disease.
Seriously, this kind of stuff would only happen to me.
Now that we live surrounded my animals, none of them have tried to come into my house. The garage on the other hand....well that's a story for another day!
Posted by Melissa Haak at 8:06 PM

Labels: pets, undomestic bliss, would only happen to me

That squirrel must have spread the word. They are chatty little bastards.

That would freak me out!

When I was about 5, we had a BUFFALO in our yard. It had escaped from the zoo, like a half hour away and found its way to our yard!!!

Too funny! Squirrels kinda freak me out. I call them tree rats, but don't tell PETA. Stopped by from SITS - have a fab day!

We went through the "squirrel in the house" mania at christmas time. We were out of town and our cat sitter blamed the cat! We came home, saw poop everywhere and thought we had rats; until we opened the cabinet under the sink and saw a squirrel smiling back at us. Yikes! I so feel your pain. It's a story that you will laugh at down the road, though, I promise you that!