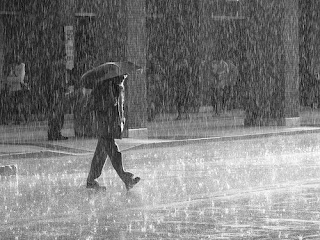 When it Rains, it Pours. The Spring showers arrived this week melting the snow, starting to wash away the grim and garbage that laid buried under the snow.
It rained in my world this week too. It was one of those busy weeks where you are running and running and running. I really felt like the mouse who asked for the cookie. I would start, do, ask for one thing which would remind me or lead me to something else that needed to be done and while doing that something else would come up. You know how it goes. In the whirlwind of the week and prepping for our huge preschool fundraiser my hormones decided to they wanted in on the action!
So while I am racing through the hamster wheel that is the week, which included a rushed trip to the library, I am also trying to stay calm and balanced in my mind that is awash with hormones it's not supposed to have and wasn't prepared for. It was a reward for good behavior when I took the kids to run errands, in of course the rain. I am sure at this point you are expecting one of the typical stories of my kids at the library acted like wild animals and huge fines. Not this time. Aside from my daughter having no idea what an indoor voice is we were having a relatively uneventful visit. Then I ran into an acquaintance and her new baby bump. As she is asking how I am recovering I am trying to not have a complete breakdown in front of her and everyone else in the library.
I now I am a little more sensitive, and I mentioned the raging hormones right? I swear though everywhere I turn from craft bloggers I follow to other people in my MOMS club, to every women I see at Target, it's one baby bump after another. I swear it's like they are putting hormones in the water. It was a funny joke when I was pregnant, but now it's just a cruel reminder. So as I am headed down this self depreciating spiral and trying to keep myself focusing on the right now instead of the what could have beens. Then the phone rings.
It was a sock in the gut.
It was my OB. She had the rest of our genetic tests. Our baby was genetically normal. So she doesn't know why we lost it. Can't tell us if it will happen again. She doesn't think it was the IUD because problems should have shown up sooner. She doesn't think I need to go get further testing because I have two healthy children that were normal pregnancies. It just happens and we don't always know why. Well that doesn't really help me. That makes me feel like it's me. It was my fault. I wasn't suitable I couldn't sustain a good habitat.
Oh I know, in my rational mind, that it's not true. It's not my fault, there was nothing I could have done. That doesn't lessen the pain. It didn't help that on that particular day my husband was having the worse, WORST, day at work. So while he tried to be supportive when he was home for lunch, it came off as exasperated...just get over it. Not his inattention I know! He is so supportive and loving, but when it rains it pours!
We regrouped that night and held each other tight. Prayed for the spring renewal that the rains bring.
GOD promises he will take care of us and he does. We awoke to a new day, to some sun, albeit briefly. And while my hormones raged on up and down and up and down I dove head first into preparing for the preschool fundraiser. I was lucky enough to start the period that I was not supposed to be having that morning at the event. Why was that lucky? I didn't have time to think of it. No time to dwell to feel sorry. To wallow in the pain of the unfairness of it all. My focus and energy was on the event and it was amazing! We raised the most money ever! I got some great things for myself, the kids had a great time it was a great day.
While the time change and the cramps and the all that comes with a period that your not supposed to be having made for a kind of grumpy Sunday, we made it through.It will not always be rain and clouds. the sun will break through. The rain is needed to cleanse, to nourish, to grow.
We are blessed. Our kids are healthy we have what we need even if it is not what we want at this time. That is what I must remember and focus on. 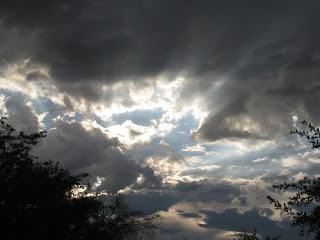 {Photo credit flakeparadigm via flicr}
Posted by Melissa Haak at 7:26 AM

Your and insight are always so powerful Melissa! I am so sorry for the pain you are going through, but I am so glad to see the perspective you are taking. Know you have plenty of supporters, and definitely one in me. You are strong, and you will feel at peace. I'm so sorry again that there are no answers. Sometimes that's the hardest thing to process. (hugs)

I am amazed at your strength. I am not sure I could have held myself together as well as you do on a daily basis. I hope you and peace are reunited again.

Giving you a big old hug right now through the lines. What a tough, rotten day. I'll keep praying for that sun -- both literally and emotionally.

may all ur problems get solved and may u always be blessed with what u want ,i am erum my blog ishttp:// artscraftsnhobbies.blogspot.com you left a comment on one of my posts a few days ago. From SITS