The United States has been taken over by a Cyborg Overlord. 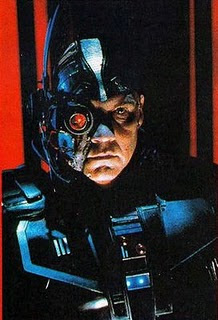 {image via Google Images}
The worst part of this Cyborg Overlords tyranny is that he fancies himself an artist. He has subjected the population to his version of fine art, which happens to be tattoos. His most preferred canvas? The backs of women, he considers them to be the most beautiful of all skin. He has declared that every women in United States get a full back tattoo done by him. If it's not done, he will blow up the United States.

I have been hiding in a cabin in Wisconsin. It's not my aversion to pain or the thought of his creepy hands touching me, although those are all reason. It's my husband. He hates body art, always has. He has threatened divorce in the past if I got a tattoo. He also is part of a militia group who is anti-Overload. He feels all the women that have subjected themselves to this are sheep. He doesn't be live the Overlord would actually blow up the United States or that the world would end. He doesn't believe it's possible to ever have all the women tattooed as someone new would be turning 18 everyday, therefore leaving another back to be done.

I'm not so sure, and as a mother it's not a chance I am willing to take! So I have a plan to sneak out of the cabin to get the stupid back tattoo and hopefully save the world. So what am I having done? Well if it could possibly ruin my marriage and save the world it better be full of meaning and symbolism right?

I decided it would be a tree, a big gnarly oak tree: 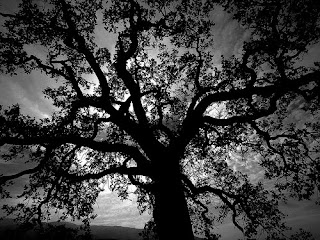 {image credit: AlexPears}
To symbolizes the tree of life as I would be giving life to the earth again. It would be my family tree as I would have my families names hidden in the bark. It would also symbolizes all that grounds me as I would also have my favorite bible quotes in it. the leaves on the tree wouldn't be leaves, but birds sitting in the tree. You would only notice they were bird when you looked closely, like an optical illusion. It would be a reminder of how things are not as the always appear and beauty can be fleeting. Lastly I would have one little butterfly on my shoulder, so that I could always see it as a memorial to the son I lost and reminder to keep looking up, to keep seeing beauty even though world has become a dark place.

I waited. The Overlord was traveling the country doing a sweep to find the last virgin back for him to work on. When I heard they were in my area I decided it was in my best interest to come forward. I was worried about scaring the children or what his soldiers would do to me when they found me. So I convinced my husband we needed something from town. Something that we needed to get before the army moved into our neck of the woods. He reluctantly agreed reminding me of all the rules, how to stay covered and how to use the weapon he gave me. I hopped in the car and headed to the town the Overlord was at, several hours away.

I was nervous, wondering if I was strong enough to stand my ground on design. Wondering what would happen, thinking the worst. When I approached the city I was stopped at a road block. This was it, it was time to turn myself in. When the guard stopped my car I told him who I was.

"I am the woman you are looking for"

I can barely remember what happened next. I was pulled out of the car, my shirt pulled up and my back checked. When they realized what they had I was put in a car and raced to the Overlords location. I clutched the paper in my pocket that held my rough sketches and ideas. I prayed for the strength I needed to do this.

When I was brought before the Overlord he was setting up his equipment. He looked evil, slimy I think he was drooling.

"Well my pretty, are you ready to become living art? To save your pitiful little nation from being blown up?"

I opened my mouth and hoped my voice wouldn't fail me. It was a little shaky but I said. "Wait. I want to choose the design. I have a picture and ideas right here" I reached into my pocket.

The overlord threw his head back in a horrid, throaty disguising laugh. "Oh pretty one, you are not the artist, I am. I will choose your design as I have all the others. You are nothing but a canvas."

I had to think fast. There were guards everywhere, I couldn't run. I decided to play to his ego. "Oh, okay, it's probably way to complicated and hard of a design for you to do anyways. I heard from many that they were unhappy with your work. That it is juvenile and amateur."

"AMATEUR! I am a great, not an amateur! Let me see it I can do anything, anything you can imagine! I am the best artist in the world!"

I knew it, he may be an Overlord but he is still a man, with an ego, even if he is some sort of cyborg. So I gave him my ideas, tell him all I want.

"That is all? That is basic art, no problem"
He sat down to begin sketching. I prayed and I hoped. I knew that the symbolism, the writing of bible verse would be hard for him. He did not believe in my Lord, he loathed all that he stood for. He also, could barely write in the English language, let alone in script to make it blend in with the grains of bark. He hated nature and I knew that he would have problems making it look realistic and not robotic. I was hoping that his electric processing units would fry and melt from the challenge.

He was hunched over the paper sketching, and erasing. Furrowed brow, sweat dripping. We had been watching him for hours. I would occasionally prod the angry beast with comments about how it looked, or egging him on about how hard it was. I only stopped when I was threatened with a fist of a solider and removal from the area. The artist needed to think.

After hours of this something happened. There was smoke coming from his cyborg parts. Sweat was dripping from his brow. He angrily pushed himself away from the table, crumbling the paper up. Than it happened. He had a complete meltdown. Cyborg parts failed, he couldn't not form a sentence. While the soldiers rushed to his side to figure out what to do, I rushed out the side door and ran to find a car and go home.

As I was racing home. Not really sure what had happened, or what would happen. Would they fix him, would they hunt me down? Would they just blow up the planet? I heard on the news. The Overlord had died. His second in command would be taking over. He was immediately suspending the body art program, as he was not an artist. A smile crept over my face. I had saved the world and I didn't have to get the tattoo after all!
This is a work of fiction, for MamaKat's Writing Workshop, prompt 4, because really, the world coming to an end would be the only way I would get a full back tattoo because I could not tolerate the pain and my husband would divorce me, even if it was a small one and not a full back tattoo. You can join in the fun or read others here.

If you read Sci-Fi I apologize for this rendition. It is not my favorite despite being tortured with it for my entire childhood and on occasion in married life. Just use your imagination and pretend it makes sense!
Posted by Melissa Haak at 7:03 AM

Love that you made it into a narrative - and love the idea of hiding your families names in the tree. Now I kind of want.

Stopping by from Mama Kat's. I'm not a big sci fi fan but I thoroughly enjoyed your take on the assignment today. Quite inspirational!

Thanks for commenting on my blog! I loved your story. Being new to Mama Kat's I never really thought of turning one of the prompts into a short story. I loved the line, "There was smoke coming from his cyborg parts." I got a good giggle out of that image.

What an interesting post! I was all in it.

Thank goodness this was fiction!!! : )

I don't want a tattoo either ... if forced by the cyborg overlord, I'd get one that looked like a mole.

I love your take on the prompt!

oh, I am jealous I wish I had thought to make it a story, mine was short because I wasn't being creative, you should write books if you don't found you from the writing workshop.
http://nf1andpre-kwhisper.blogspot.com