On Pomp and Circumstance

I had planed to have posts scheduled and up.

I had planned to have the house cleaned and the laundry in the drawers.

I have been sick. My son has been sick, and now? Now my husband is sick. Strep when it is 90 degrees is akin to cruel and unusual punishment.

So today I will leave you with this: 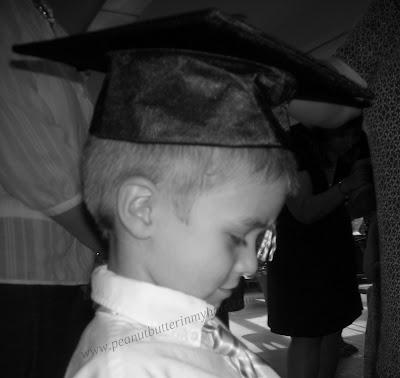 My little man is moving on to kindergarten, where on earth has the time gone?

I feel a lot like him. He was busting with excitement and joy to graduate and went running into the classroom. He became a little fearful when they wanted to put the hat (that would not stay on!) his head. He performed like a champ and looked so proud of himself. He became shy around his friends at the celebration, and dragged his feet when leaving. He finally broke down into tears int he car. He doesn't want to leave his school, he doesn't want to go to kindergarten. Well he does want to go to kindergarten but he doesn't want to leave his school.

Oh and mommy, I don't want you to leave tomorrow can you send daddy instead?

Yeah, my heart split in two.

It was a late night with tears and hugs. I feel just like him, excited about the adventure ahead, but also scared. Joyful of what we have had but sad for what we will loose.

I'm heading to the Casual Blogger Conference this weekend. It's my first conference and my first time traveling all by myself in over 6 years. I kind of feel like my little man and the thought of entering kindergarten. So excited to go and learn and meet new people. Kind of sacred and wanting to stay with what and who I know.

Have a great weekend!
Posted by Melissa Haak at 6:44 AM

Awww what a cute picture :)

Aaaawww...you guys will all be fine {this week and this upcoming year}! Change {even temporary} is always so hard. But it's so essential for our growth. I hope that you all get feeling better and I hope you have a wonderful time at the conference!

It's the going away that's a little scary, but arriving is so wonderful! Have a great time at your conference, I am sure you will enjoy your you-time immensely.

Moving on...such a scary thing, isn't it. But look at you both! The things you will learn and the friends you will make will be many and lasting! Take the plunge. Jump in! Have fun!!

I got to tweet with you at #cbc10!!!
Wasn't it fabulous? (Well not the tweeting part, although that was COOL.) But the WHOLE conference...
I am so glad i went. I don't think I got to say Hi to you Nuts, there were SO many people I did not get to meet.
So many people...

But now I have so many blogs to find and follow!!!
I LOVE the title of your blog! Very creative.
if you have Skype, we might be able to chat Live *via video* some time if you want.

After a while of leaving comments on each others pages and tweeting and such.

Did you get a TON of CBC pictures too?

Love Motherboard and Mombabe for putting this conference together!

The Damsel In Dis Dress said...

happy to have just found your blog! I gotta say, I LOVE your tagline (life with kids is sticky).

ur adorable both HERE and in person :) nice meeting you my dearie.

Can't wait to hear about your weekend. I'm headed to a conference in SF in August. I will be my first in three years and I can't wait! I hope you had oodles of fun!