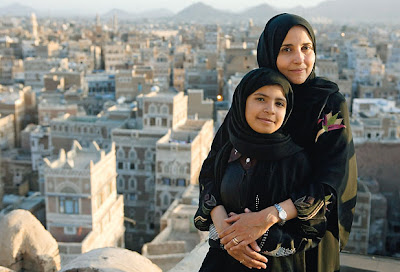 I have a daughter. She is only three but already I worry and fret over the influences that are in her life now and in the future. With teen idols along the lines of Miley Cyrus and Lindsey Lohan out there I have a reason to be nervous. I want to raise a girl who is strong and confident. Who believes in herself and her innate inner strengths. I want her to know that she can do anything she puts her mind to and to always stand up for what she believes in her heart. I wouldn't mind at all if she was more than a little like Nujood Ali.
Who is Nujood Alli?
Nujood is a young girl born in Yemen in 1998. Yes I said I would like my American Catholic/Lutheran daughter to be like a Muslim born in a Yemen. Confusing? Alarming? Well despite the many, many, many differences Nujood is a girl who listened to her heart and her gut and did what was right and not what was accepted by her culture. Those are qualities far and above being able to sing (lip-sync) and dance while gyrating on top of an ice cream cart (stripper pole).
While sitting in the airport for a long long day I quickly breezed through the story of Nujood

{affiliated link}. Here is a young girl in a country that doesn't really listen to their women, let alone children. She was married off by her father at age 10, she thinks. In the rural areas of Yemen where she was born they don't have any hospitals or records, her mother tries to recall when she was born but she can't be sure. She could have been only 9.
I bet you are feeling outrage in the pit of your stomach, a 10 year old married off to a grown man (he was in his 30's) who would do such a thing. As horrible as it sounds I do not judge her father. He was doing what he thought best to keep his honor and protect his family. Honor is something she talks about a lot in the book. Honoring her parents, her customs, her religion. Honor is so intertwined into their faith and culture I am not sure that anyone really knows what honor is anymore. But I'm not talking about her father. Let's get back to Nujood.
Here is a young girl who is young and scared. Despite being promised in the marriage contract to not touch her until she is "of age" (has her first period). Her new husband takes her out to the rural villages of Yemen and immediately starts sexually and physically assaulting her. I cannot even imagine surviving through what she did, but she does. Not only does she survive, she escapes. This little girls with only one year of school who can only write her name and cannot read escapes. She walks into a bustling courthouse and by the grace of God finds a judge who listens to her story. This in a culture where she should not even be talking to men since she is a married women. This in a culture where you do not talk about what goes on behind closed bedroom doors.  This 10 year old girls tells a complete strange (and a man!) what has been happening to her. That takes a courage and a strength like no teen idol in American has.
I quickly read through her story in amazement that at such a young age and with such little schooling she had such a solid idea of who she was, and what was right and wrong. That she was able to remain confident in her choices and free herself from the constraints of a society that does not protect their children or respect their women. While I would pray that my daughter never has to struggle in even a quarter of the way Nujood did I would hope that she would have the determination and strength of character to fight for what is right and not for what is accepted and easy.


We may be worlds apart but I think there is a lot young girls could learn from a girl like Nujood. When faced with what so many would seem as an impossible lot in life, she made a change and did what was right. That changed got her awarded Glamour's Women of the Year in 2008 the same year as Hilary Clinton and Condolezza Rice. It also encouraged other young girls to seek the same help and safety for themselves. She started a dialogue and spurred change, and who wouldn't want that for their daughter?Who wouldn't want their daughter to be an instrument of change and peace?
Nujood has not stopped there. After the spotlight of her divorce started to fade she set off determined to go to school and be a lawyer like the one that saved her. Though her family was very poor, and she faced many difficulties she has worked hard and has returned to school. I know, that with the perseverance she showed in her battle to be a normal child she will be successful and I look forward to the day we read about her in the news again for breaking down some other barrier.
Yes she did not live a life I would wish for my daughter, but the lessons she can teach are far greater and more inspiring then anything on the Disney Channel.

This post is part of the SVMom's Book Club. I received a copy of this book to participate in the discussion. You can follow the discussion on Twitter by following the tag #svmomsread or read the other members posts at DC Metro Moms Blog
Posted by Melissa Haak at 6:59 PM

I would love to read this girl's story! And I agree with you. I am always looking for the right kind of "Idols" for my 9 year old daughter. I loved your post, too. Very well stated. (And I missed you!) :)

Oh, this story sounds amazing! I'm not sure I could read the whole thing without breaking down. But wow. What an inspiration she's turned out to be!

I worry about the kind of girls I am raising, and the world around us frightens me. Is it too much to ask for complete innocence but innate strength? I think my 4 year old has that now (BOY is she strong-willed :)) but will she keep it when life gets more complicated?

I agree. She is definitely a role model, and I can only hope my daughter is as brave and determined as Nujood.

Yes, it would be great to be able to share Nujood's story with my daughter. I think it will have to wait for a few more years. I just don't want her to know that such cruelty can exist in the world.

Nujood is a great role model! I fear for my daughter's sense of self also. I pray she is strong, but it feels like the world says you have to be flighty or pretty to get what you want...