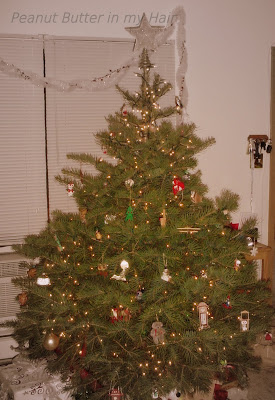 { Our first Christmas Tree as a married couple 2001}
The house is starting to smell less of dogs and sick old people and more like the food of Christmas. The smells of pierogi and soup fill the air. There is is bread on the table and much hustling and bustling about. Charles sits in his wheelchair taking it all in with a down turned head and a scowl on his face. All this hustle and bustle for what he thinks? They are all putting on a show for me, the poor old man who can't walk anymore. None of them care, none of them understand they would be just as happy, maybe happier ordering a pizza and sitting around the TV. "Bah" he mutters to himself.
"Soups done! Will someone set the table!" Auntie yells.
"There's too many settings out" Cousin Ann says as she brings the extra one back.
"No, no remember we always set an extra setting at Christmas." She lowers her voice "You know, in case someone stops by, or for baby Jesus, or something, just do it to make dad happy"
She returns the setting to the table. The kids come running in to find their seats.
"Ewwww, what's that smell?" Jack says, very dramatically while holding his nose. His mother scowls at him and hushes him quickly. "It's the herring," she tells him,  "it's a tradition and you grandpa likes it, hush now."
Charles hears it all. He may have had a stroke, may not be able to walk or use his one arm, but he can still hear. Apparently my family thinks I'm deaf he thinks to himself.
"Wait! Wait! Don't sit down yet!" Auntie says shooing everyone away from the table and into the living room
"What the? I thought you said the soup was done?" Mark responds.
"Yes, we have to do the oplatki first."
There are some sighs and groans from the crowd of gathered family. Children and grand children, all the "close" family, as Christmas should be. One of the little ones pipes up "Opopalee? What's a popalee? I'm hunnnnnnngrrrrrry!" His mother hushes him as Auntie passes out pieces of the wafers. She hands a piece of a pink one to Charles who is getting more agitated by the minute, not that his family seems to notice.
"Here you go dad"
He takes the wafer in his shaky hand, looks at it, shaking his head in disbelief. "No, NO, NO! This is all Wrong!"
"What's wrong dad?" Auntie asks rushing to his side
"This!" he says jutting the wafer out towards her shaking in his hand. He wishes he could control it. He wills his body to stop shaking but his mind is no longer in control of his limbs, much like he is no longer in control if his family. He does not fail to see the correlation.
"Dad, it's the oplatek it's tradition!" Shes says to him in a soothing voice. Assuming this is a cognitive problem, a remembering problem. It's not. Charles brain is just fine, his body, his house, his family may be crumbling around him but his mind is still a fortress.
"Tradition? TRADITION?" He says raising his voice "You want to talk to me about tradition. If you knew the tradition you would know what is wrong. The pink wafers are not for me, they are for our pets and farm animals., I am not a farm animal"
"Dad" she interrupts his rant, trying to calm him down "Dad, we don't have farm animals, or even that many pets anymore. I meant no offense I just grabbed the envelope from last year."
"Bah" he answers her waving her away with his shaky hand. "Tradition, what's the point of tradition if your just going through the motions for a dying old man? What's the point of tradition" he says the word tradition in a tone that is mocking and dripping with his hostility. "If you don't remember why you do it, or believe in anything behind it? What's the point? None of you even went to church today, or are going at Midnight, like you should. When was the last time you went to mass?" he says pointing an accusing finger at Mark, who sheepishly turns his head and eyes down knowing it's been a very long time. "One of the holiest days! Our biggest celebration and none of you know why, none of you care! You think you can throw 'tradition' out there like you know what it means, routine is a better word for what is going on here!"
He pushes his chair back with his one good legs and moves slowly towards the door. Everyone is just standing around shell shocked and silent. They know in their hearts he's right.
Than a little voice pipes up and breaks the silence. "I went to church with school today grandpa! Tomorrow I'm singing with the choir, is that tradition?"
The old mans smiles a bit and his heart warms "Yes Jack, that would be tradition. Come here, let me tell you about tradition. How our Christmas' used to spent. About the Wigilia and the Oplatek about the hay and the herring. It all stats with the birth of Jesus."
As far as Charles is concerned the rest of his family disappears as he recounts his childhood  Christmas' to the child in his lap. Retelling him the stories and the traditions. They spend the rest of the evening, side by side telling stories and recounting traditions. The youngest and the oldest, bridging the gap and connecting the past to the present.

This post is part of The Sunday Creative prompt: Tradition, medium: fiction. I'm also linking up to Old School Photo Friday because the photo is old.
Posted by Melissa Haak at 6:00 AM

What a beautiful story! All those things sound familiar - my husband is Polish! Thanks for stopping by my blog! So glad I caught a glimpse of that pretty tree - I've been missing Christmas lately.