Back into the routine, the swing, the how long can we avoid the grocery store game. Yep life is back to normal in the PB house! We did plan this week, which is a step up from last week!
The Plan:
Sunday: Chili Mac
Monday: Quiche
Tuesday: Slow Meat
Wednesday: Mac and Cheese with a meat the picky one will eat
Thursday: Leftovers
Friday: Fish
Saturday: Pizza
The Reality:
Sunday: Chili never gets forgotten. For one thing you can brown ground beef when it's frozen and we almost always have ground beef in the freezer (local, we get  it at Domnick's during their super $1.99/lb for the 93% lean, it's going on now, it's a HUGE package but if you take it to the butcher they will repack it into 1lb packages for you!). You can read all about my, er Hubs, Chili recipe in yesterday's post.
Success? YES
Picky Eater Rating: 1 bite, she only eats the plain noodles and since we used the cheddar cheese she turned her nose up at it. 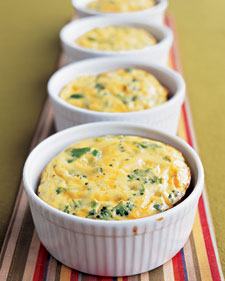 Monday: Some people do a meatless Monday to save the environment, money, whatever. Our intent was to use was in the house. We make this Crustless Broccoli Cheddar Quiche Recipe from Everyday Food, we call it Broccoli Pie and serve it with crusty bread . I make one big one in a pie plate b/c I don't have enough ramekins for it all.
Success? Yes! I even made most of it myself. We use fresh broccoli instead of frozen so you need to cook it longer than a minute. Which would have been my downfall if hubs didn't come home right at that time!
Picky Eater Rating? Did you hear the angels singing? No seriously! This has been a battle meal for years. One time we thought we would try the you will have this for every meal until you eat it, and she didn't eat for 2 days. This time I traded crusty bread (with oil and cheese) for each bite. Her piece of bread was the same size as her bite. SHE ATE HALF HER PIECE! It was a miracle.
Tuesday: The plan was for slow meat. However we forgot to take it out of the freezer and it was an almost 6 pound pork shoulder. So we needed a quick meal. Hubs picked up Polish Sausage and we served it with green beans and mashed potatoes.
Success? Well we had to go to the store, but we used the last of the potatoes and green beans (fresh) we had in the house.
Picky Eater Rating? 4 Bites! Now sausage is one thing we know she will eat (which is why we picked it up). She still gags on potatoes like we asked her to eat a cotton ball, but she did swallow one bite and she ate all her green beans. This was a huge success because she picked them up out from the store and said she would and she did, HUGE! Also, we are probably the only house in America that has utter the words, "good job! for a reward you can have more sausage!"
Wednesday: This is a busy day. Husband and son have Advent services at his school. We had a bit of miscommunication. I was going to make Peanut's favorite, Mac and Cheese and Hot Dogs because I thought hubs and son were staying for the dinner. They weren't. So we made Fishsticks (Trader Joe's), mixed with the last of our frozen veggies and macaroni.
Success? Sort of.
Picky Eater Rating? 1 bite. Not even the promise of more macaroni could make her take a bite of fishstick that included fish. Sigh, she at one time would eat them. She did eat all her vegetables (peas and corn) 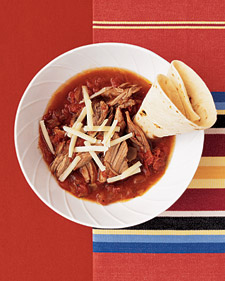 Thursday: Is another busy night as Hubs and the son come home late. But the meat is thawed! So we made Spicy Pulled Pork in the crock pot. Only it wasn't so spicy because I need the kids to eat it and my meat is 3times bigger than the meat in the recipe, we like leftovers. We served it with raw veggies (peppers and carrots) and tortilla chips.
Success? YES! I love crock pots. Makes the evenings so much easier.
Picky Eater Rating? 1 bite. She did take two bites of her tortilla,which is an improvement. Also, discovered she likes white cheese (Monterey Jack) which is a positive step. Probably not uttered in your house: "Please stop eating your vegetables and eat your taco". He did eventually eat it all.

Friday: We had planned to go to a holiday light event and debated between packing sandwiches or leftovers. We choose leftover chili.
Success? Yes, we scarfed it down. NO because we didn't check the times on the exhibit and it was closed after dinner.
Picky Eater Rating: See Sunday.

So how were your dinners this week?
Posted by Melissa Haak at 8:30 AM