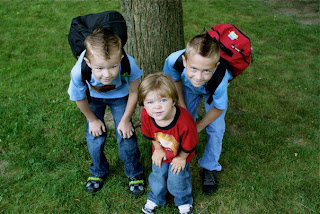 Someone once told me that after the third child, you really don't even notice the extra work from any more.  But I won't be testing that theory!  Considering someone ALSO told me that going from two to three was the easiest adjustment for them, and I know personally, THEY lied.  Or maybe, I guess it's different for everyone and probably varied depending on age gaps and maybe even gender.  But for me, adding baby number three was the straw that broke this mama's back.  Well, not literally of course, but it has definitely taken a toll.

Being out numbered does make things that I had down pat with 2 seem much more complicated.  My third "baby" just turned three years old and I am really just finding my groove when it comes to taking all three of them anywhere by myself.

Before I had kids I assumed, two kids was twice as much work and therefor three would be three times as much work.  But the work definitely multiplies more than that with each child.  For me #3 was also a little more complicated because my first 2 were just a year apart and baby #3 came 4 years later.  While I was originally terrified by the prospect of having 2 babies in a year, it really worked out very well.  They are always in the same, or at least similar stage of things (after the second became a toddler).  This meant they did all the same things.  When we went to the park, they were both able to do the same things.  They were typically old enough for activities at the same time, or at least very close.  But now the older boys are always doing something, sports or Scouts or something, and then there's Bryan who just has to tag along.  Thankfully for us, he's a pretty good sport about it.  But when he began showing interest in sports as a toddler, its hard to explain to him how many years he has to wait to do what his big brothers do.  He has wanted to be a big boy forever and all but skipped any of the typical baby toys.

But he is the funniest three year old ever.  He has a much more mature sense of humor than he should for his age.  He is the light in my day most days and I wouldn't trade him for anything.  Three kids is more work than I ever could have imagined but it is TOTALLY worth it.

I didn't really notice that much of a difference from 2 to 3 kids but the 4th was the straw that broke this Momma's back. It was a riot trying to figure out how to do everything, be everywhere and where to put everyone. I had 3 boys first so I understand what you mean about the 2 oldest always doing the same thing or in a different stage...my daughter is now their tag along in everything they do.

I actually thought going from one to two was fairly...easy? Maybe easy isn't the right word, but somehow, everything kind of fell into place. Now, when planning for a third child, I worry...would it be HARD?? And even if it's hard, am I willing to do it all over again.

Without a doubt, the answer is yes :) Those baby snuggles...breastfeeding...milestones...oh. I have to do it again!

@Melissa I've been told by many people that going to 3 was easy too but it wasnt' for me.

@This Heavenly Life
going from one to two was way easier than I'd thought it would be in most ways but in many ways you think they'll demand twice the attention but in reality its more than that because now there are new problems to address, like fighting, in addition to the time and attention they need. but over all going from 1 to 2 was the easiest adjustment of all my transitions thus far!