As a parenting “philosophy” we are fierce protectors of our children’s sleep. I prescribe to the Anymommy philosophy of an early bedtime. I firmly believe sleep is so important for kids and that one of the reasons my kids are so smart is because I protect their sleep schedule (not that I’m saying your kids will be dumb if you have a more lax attitude, I’m not!).
When my first son was born we read Weissbluth and followed it pretty much to the letter. My son (on his own) slept through the night at 8 weeks. He loved to sleep. He napped 3-4 hours an afternoon until he was 3.5 years old and we had to pull it from him because he would stay up all night. Still at 6 he will sleep, pretty consistently, exactly 12 hours from when we put him down (granted he doesn’t stay up past 8- sleep begets sleep for him). We fiercely protected his nap schedule as a baby despite complaints and protest from family about never being available. It’s what worked for us at that point in our parenting lives.
My daughter, well she is not a fan of sleep at 4 years old she still wakes 3-4 times a week. At 11 months she was still nursing multiple times a night. I think she was almost 2 before she slept through the night the first time. We tried to get her on a nap schedule, but we also had another child and he had a schedule of classes and activities. At 10mo I pushed her to one nap and she napped until around 3 when she gave it up. If I’m lucky, she gets up at 6:45-7:00 everyday, no matter what time she goes to bed. If she’s hungry (because she is a picky eater that frequently skips dinner) she can be up at 5.
Guess which child we would like Bean to be more like?
We started co-sleeping simply because it meant we got more sleep. She is still doing relatively good at night. I say relatively because we have had a few rough nights due to a late night wedding and I think a 12 week growth spurt. Her days however are a mess. She spends a good chunk of her day driving the big kids to and fro their various activities. So we have fallen into the rut of sleep in the car, sleep in the swing at home, have a complete afternoon meltdown from being overtired, sleep in baby carrier on mommy until bedtime. So as we approach the 12 week mark I am trying to instill some kind of order and rhythm to her life so that she gets one, if not two naps in bed, so it’s good sleep.
The problem, this is what she needs to fall asleep: 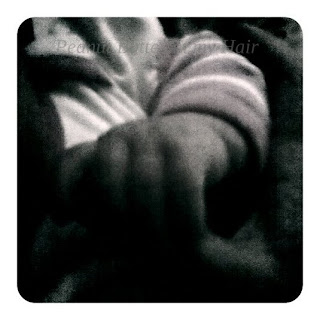 Excuse grainy cell phone picture. That’s my hand being held in her little fingers. So cute huh?
Not when your desk looks like this: 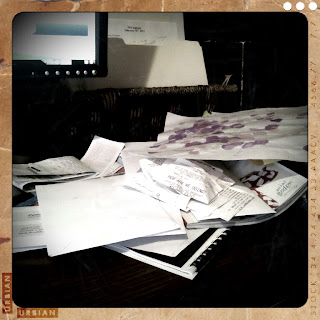 (it's actually worse, that picture is a month old)
Oh and my to do list? A mile long.
Sigh.
This parenting gig isn’t easy. Also, genetics are so much fun!
PS: Nap 1 in bed today, 40min. Attempt 2? Failure, she's currently sleeping in the swing next to me.
Posted by Melissa Haak at 1:48 PM

Oof. Hopefully it gets better soon? But I'm not going to lie, that cell phone picture got a great big "awww" from me.

I'm so not looking forward to this part of having a new born. If it helps any, my son wouldn't sleep in his crib until he was 3 or 4 months old. He slept in his car seat for the first 2 months, his pack n play after that, and then finally made the move to his bed. Hang in there.

We used the same sleep book! It helped so much with my son. I've tried so many times to explain to my parents why putting him down later does not mean he will sleep in later but they just don't get it.

Use that swing for all it's worth! My son didn't sleep in his crib until about 6 months old, which is when I started reading Weissbluth and when I let him sleep in the swing, pretty much going against Weissbluth's statement that they shouldn't be moving. It kept him quiet, and I got things done. So there!

Sleep - the center of every parent's world. I LOVE that I've been given ownership of the early bedtime philosophy, but I fear that it was already copyrighted ;-)

I'm so curious to see how my next kid will sleep. Curious...and scared.

This is my worst fear! My first child slept so amazingly well that I'm afraid our second will be a mess!

I don't think sleeping in a swing at 12 weeks is a failure by any means. You gotta do what you gotta do - third child, it's a challenging figuring out the sleep ting in the midst of all the schedules and craziness with older siblings. (And no, I'm not saying yours older siblings are crazy - I'm referring to my own children!) I just try and "protect" at least one of the naps each day and hope that it is a really great one!

I'm SO incredibly nervous about this. With one it was so easy to sleep when he slept, we were also 'those parents' that protected the nap and bedtime schedule. Now with the second one on the way I'm terrified that the entire sleep situation is going to be interrupted.