I used to believe picky eaters were made not born. I, a reformed picky eater. Was sure my parents were the reason for my picky habits. My mother was picky. We had a very limited variety of foods that were rotated though and if I didn't like something my parents (my dad) would make me something else. For years I wouldn't eat white rice so they always made me macaroni or potatoes.

Once my husband and I got serious and he had started stripping me of my picky eating tendencies he put his foot down. We would not create picky eaters. We would not cater to their ways. There would be no crust cutting off, no special meals prepared we would all just eat and try new foods.

She was born picky. We thought.

I definitely believe now that some kids are born with more stubbornness when it comes to food. What I have learned in the last four and a half years though is that picky eaters are made by parents who enable them. We, even my staunch no picky eaters husband, totally and completely enabled her to the point that we had a macaroni addict who wouldn't even touch a vegetable. See we got tired of the fight. We got tired of sending her to bed hungry (which we did many, many times) and subconsciously we started planning our meals around that. Every third day was some sort of pasta so she would eat it. We never tried new things, we rarely made vegetables other than broccoli and the only meat we had on a regular basis was chicken and ham, all that she would eat.

I realized that while we thought we were being such good parents, making her take a bite of everything, limiting snacks, not making separate dinners; that we were in fact no better than those things. It was one of the main reasons we decided to start our Update Dinner Challenge we were tired of eating the same food yes, but we were also tired of catering to her very limited appetite.

We are finishing our 15th week of the challenge and I can honestly say I have a practically new child. Is she still picky...yes, especially hen she is not at home and faced with a new situation. However she has improved by leaps and bounds. She has devoured fish and steak, stealing it off my plate. She has tried polenta, leeks, carrots, corn bread...everything we have made she has tried with no tears and no fuss. Last night she ate white wine risotto and declared it the best cheesy rice ever! So yummy! She ate all her chicken and all her peas and the best part we didn't have to bribe her with dessert. 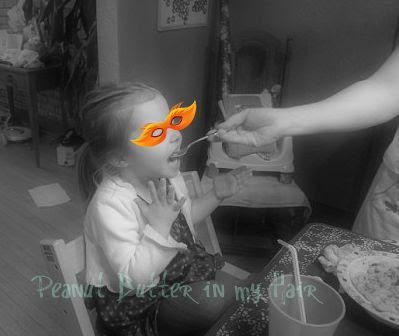 It was a rough start, with lots of tears for no macaroni and several times we had macaroni for lunch just to get us through the crabbies. She has even started eating salami and has eaten her first ever sandwich made on actual bread and eaten put together. She discovered this summer that she loves peaches and nectarines and she polished off all her green beans two nights ago with just a littler prodding. I think in addition to our change in dinners having a little sister who is now starting foods and growing quickly is helping as well.

So if you are a parent who is struggling with a picky eater, it may be time to stop looking at them and really take a hard look at your behaviors. Do you let them eat snacks, especially mid afternoon, because they have snubbed everything all day and you don’t want them to be hungry? Do you make multiple meals? Do you base your menu off of their tastes?

It was not easy, especially the snacks. The first few weeks we stopped allowing snacking were tough, there were lots of tears. If dinner will be later than 5 or if they are playing hard we will sometimes cut up veggies and leave them out on the table, otherwise there is no snacking. A hungry kid will eat, they will try new things and everyone will be surprised.

The truth is your kids won’t starve if they miss a meal here or there because they don’t like it. Once we laid down the rules; at least 1 bite of everything and you can't get up until at least your brother is done. There was no more yelling, no more fighting at the table. The expectations were clear and she knew that there was no macaroni coming so she just ate. dinner is now a tastier and more enjoyable event instead of a battle.

Do you have a picky eater? How have you handled them?


*In full honesty and disclosure tonight we had pork something she normally likes, but she was overtired so she barely picked at it and wouldn't eat more than one bite of the mashed potatoes and green beans.

Thank you so much for saying this! I know a picky eater who has been enabled well into her teenage years, and it really does spiral out into other things, where now she cannot eat out at friends' or families' houses without special circumstances being made for her and everybody else's dinner has to revolve around her taste, or the person cooking has to make something special for her, or she just doesn't eat. I really do think enabling picky eaters can be detrimental in the long run (not to mention all the veggies and fruit and other healthy vitamins & minerals they need that they'll be missing out on). Not being a mother myself, I generally try to keep my mouth shut on this topic since I obviously don't know the hardship of working with a picky eater day in and day out. But I have always secretly believed that taking the hard line would work and be so worth it in the long run.

snacks and apple juice are *our* guilty culprits. Thanks for all of this info...very helpful! I fear the meltdowns from taking away snacks, but it makes total sense.

I have a 2yo who is so extremely picky. I know that I enable him and I want to take action like you have but I'm unsure how to get around his comprehension level. He doesn't understand "take at least one bite of everything". I would love to hear your thoughts on it.