Today arrived with the hashtag #fail.


The late (when I read it) evening reminder that today was the preschool feast, don’t forget your contribution!  the cause. I had totally forgotten. How is it Thanksgiving, don’t i have another week? I remember exactly where I dropped the ball too I needed to check at drop off on Wednesday. However the toddler that was (as we know now) in the final days of roseola was in my arms, held like a football so he couldn’t hit me screaming his head off that he couldn't stay. Cheeks burning I was trying to get out as fast as possible. I have four, I am supposed to have this and all the other younger siblings are so well behaved.


So today started with the feeling of failure. Despite kknowing that I had time to pick up said snack, if we left when we were supposed to in the morning. I labeled myself a failure. I let that weight drag me down, the cloud overshadow everything else.


Today had me earning my mom gold star, big shiny and glowing.


Book report number 2 was due for my second grader. We, of course, knew this it was on the calendar circled and highlighted. We talked about it on Monday, and Tuesday, and then promptly forgot about it until our teacher conference on Thursday night. Such is the life with four kids. School work, meetings, keeping up is hard. When we arrived home she had homework that took her forever to finish, it was was after 7 and she needed a shower.


That brings us to this morning. She was going to dress up as her character and give an oral report I just needed to find the sling her brother used when he broke his arm. I searched all over the (of course trashed) playroom and couldn’t find it. I had a vague feeling that we got rid of it.  As I scanned the basement my eyes fell on some white fabric, with just enough stretch and no plans.


In minutes, we had the perfect Billie B. Brown Costume; 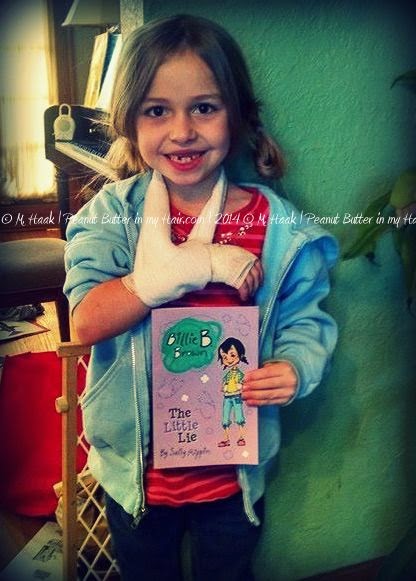 She was beaming, Dad texts “great job mom”. I felt like mom of the year.


These two mornings, both this morning.


If that doesn’t sum up this motherhood journey we are on. Ups and downs, failures and successes. The rise of social media and the instant sharing makes it so easy to slap that hashtag #fail on the day. Let it hang over my head and in the back of my thoughts all day. I may try to play it off as a joke, self-deprecating humor at it’s best. But that weighted cloud will eventually start to change everything else in its aura. It could have made our last minute ingenuity into yet another failure. It was last minute! We could have made a cast!


There is always something, someone, that can or did do something better. There is always more that I can and should be doing. Finding the joy in motherhood means not comparing myself to anyone but myself. To grading myself against the smile on my child's face and not the number of likes on a post. Every day that I get to spend with these kids is a win, because they won’t be under my care forever. I can look at it as a series of failures and all I did wrong, or I can celebrate what I did right.
Posted by Melissa Haak at 10:45 AM